Michele Polis, 35-year-old MSU hockey instructor and friend to many on campus, passed away on September 26, 2001 after collapsing at Floyd Arena. She had arrived at Floyd Arena to accompany the Quarry Cat’s Women’s Hockey Team practice session, whom she acted as coach and coordinator to.

“She [Michele] meant the world to everyone. This is such an unfortunate loss to Floyd Arena,” said Manager of Floyd Hall Arena Tim Fox. Assistant Manager of the Floyd Arena and MSU alumni Dan Murtha also expressed his sadness when stating, “She will be sadly missed, but her memory will go on. She meant a lot to everyone here, whether is be employees, customers or friends.”

Floyd Hall Arena opened in March of 1998, at which time Polis began as a customer and volunteer. In ‘99-‘00, Floyd Arena officials realized that Polis was “such a great hockey administrator that we hired her as a paid instructor,” said Fox.

Floyd Hall Arena has put together a scholarship fund, which is named “The Michele A. Polis Memorial Fund,” the proceeds of which will go to her two children Aleko and Nikos Polis. 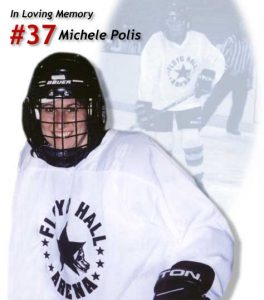