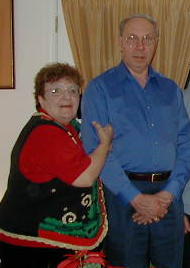 Lou was the Commissioner of the league for 25 years before retiring in 2005. Though Flo, AKA “Mrs. Lou,” did not hold an elected office, she did much of the administrative work for the league for those two and a half decades. Flo passed in November 2007. Though the Deutsches were not actively involved in daily league business for the last few seasons, we still enjoyed seeing them at playoffs and Flo is dearly missed by those who knew her.